University of Tehran at Webometrics Ranking Muharram mourning ceremony held at UT main campus How Effective is the Thermal Performance of a 3D Printed Building?

visits:580
UT PR: The Iranian Seismological Center, an affiliate of the UT Institute of Geophysics, restored and launched ILPA 6 permanent broadband seismic station in Markazi province in June 2021, with a view to expanding seismic stations for better coverage of earthquake-prone areas.

According to the UT Institute of Geophysics, in January 1976, an advanced seismic array, consisting of seven long-period borehole seismic stations, was installed and launched in Qom-Saveh-Karaj region located in southwest Tehran. Six out of the seven stations were installed on the six vertices of a hexagon. Each were placed 35 km away from the center of the array, and the remaining station was installed roughly at the center. The seven stations as a whole were designated as the Iranian Long-Period Array (ILPA).

Following the upgrade of data systems to digital technology in the 1990s, ILPA went out of service due to its outdated analog technology and the impossibility of modifying its data record and transfer method. Additionally, some of its stations suffered irreversible damage with the passage of time on account of urbanization. ILPA 6 seismic station, which was located near Aghzi Gong village in Mamounieh, a city in Markazi province, is one of the seven stations of the Iranian Long-Period Array (ILPA). ILPA 6 was upgraded and launched in 2021 by dint of the effort of the Iranian Seismological Center.

The following figure indicates the seismic waves of an earthquake that occurred in Tabas, a city in South Khorasan province, on June 27, 2021. The earthquake registered 4.3 on the Richter scale, as measured and recorded at ILPA 6 seismic station, and was centered about 1000 km away from the station. 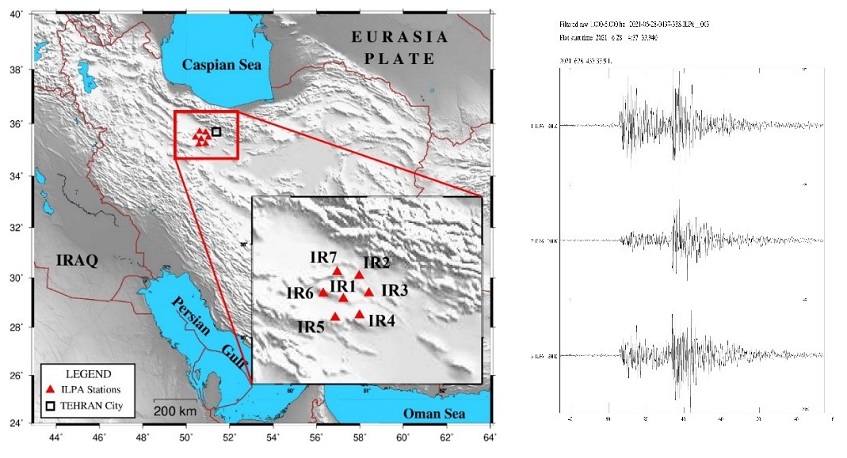