UT-TUMS International Festival to be held on 7 June, 2022 UT scholar delves into Hiroshige’s paintings to explore Edo era Japan UT professor invited to serve as the sole member of CRCASR

Head of the Counselling Center of UT:

visits:702
UT PR: Head of the counselling center of UT announced that the first national congress on covid-19 and university will be held with cooperation of a number of organizations and universities in January 2020.

According to the Counselling Center of UT, Hamid Peiravi, head of the Counselling Center of UT and executive secretary of the first national congress on covid-19 and university asserted, "this congress will be held online by Organization of Students Affairs of Ministry of Science, Research and Technology with cooperation of UT, Sharif University of Technology and University of Shiraz on January, 6th and 7th of the current year." According to Peiravi, the Corona pandemic has immensely influenced all fields of life and since there have also been psychological consequences, economic and social fields should also be brought under scrutiny. He stated that the system of education is among administrations with multi-faced impressionability and then added, "In a certain way, necessity of cognitive and behavioral adaptability with consequences of such impressionability has turned into a priority in the field of planning and execution within the system of education. However, a though-out adaptability requires an initial scientific awareness over various educational, social and psychological consequences of the Corona pandemic in order to consider such scientific awareness as the foundation of careful planning and research-oriented measures." Head of the Counselling Center of UT in the end declared, Holding the first national congress on covid-19 and university is a systematic action in this regard. Hopefully, an opportunity for knowledge synergy will be provided with contribution of academic experts, researchers and adepts and grounds will be prepared to take safe steps in the system of higher education during the pandemic. As a result, we are hoping to provide a chance for responsible contribution and production of knowledge in this field. I also would like to take this opportunity to invite all researchers and professors to participate in this scientific and social event." 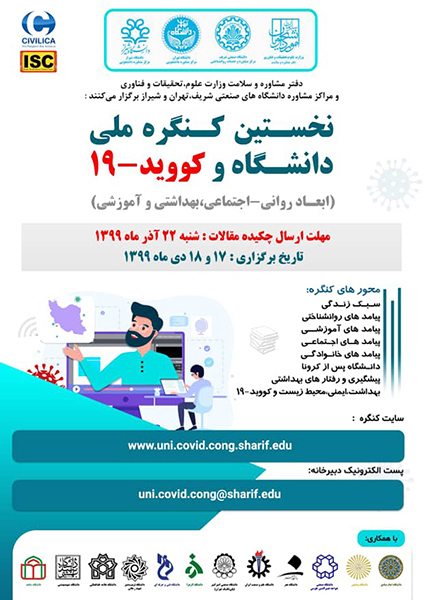