At University of Tehran: Fuel Supplements Was Produced by Plastic Waste Through Pyrolysis Process UTSTP Engineers Build Global Navigation Satellite System with Centimeter-Level Accuracy A UT M.A. Dissertation Studied the Changes in the Function of the Enzymes Involved in the Visual Cycle of a Common Eye Disease The UT Faculty Member Published His Book in Springer Publisher A Collaborative UT Research Project Resulted in Producing the First Sample of Thick Human Skin Tissue with High Elasticity in Iran At UT IBB, Intelligent Nano-Carriers Were Synthesized for Accurate Targeting of Ovarian Cancer Cells As the Result of a Ph.D. Project at UT Faculty of Veterinary Medicine, MS was Successfully Treated in Mouse Model The English Language and Literature Department at UT Kish International Campus Holds a Series of International Webinars UT Professor was Elected as a Member of the Council of IUSSP Prof. Sagaert Delivers Online Lecture Entitled “The Codification of Property Law: A Search for Principles and Sustainability in an Uncertain Era”

Maftouni is to participate in another webinar with Slavoj Žižek, Slovenian philosopher and researcher at the Department of Philosophy of the University of Ljubljana, on “Beyond Academic Philosophy”. The webinar will be held on Zoom on Thursday, June 17, 2021 at 11 a.m. (GMT+4:30).

Nadia Maftouni is a prominent writer, artist, scholar, former Yale research fellow, and a member of the editorial board of the History of Philosophy Quarterly published by The University of Illinois Press. Maftouni has had debates and interdisciplinary discussions with such luminaries as Bruce Ackerman, Dudley Andrew, David Bordwell, Kristin Thompson, Nicholas Rescher, and Dimitri Gutas in several other colloquia organized by the University of Tehran in the past.

Click on the following link at the appointed time to join the Maftouni/Rosenbaum webinar:

Click on the following link at the appointed time to join the Maftouni/Žižek webinar: 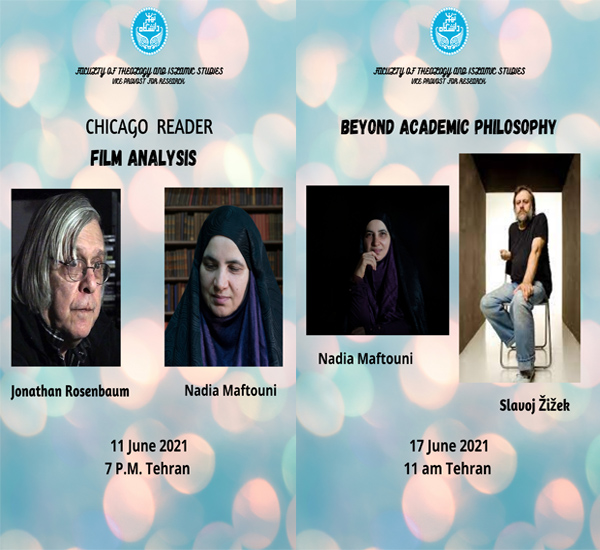