According to the public relations report of the University of Tehran, citing engineering schools, the invention derived from this doctoral thesis, which was carried out in collaboration with the Korean Research Institute of Bioscience and Biotechnology, provides a new and nature-inspired approach to solving the problem of many water sources whose nitrate levels are too high.
‬The main model of this invention, which was taken from Fariba Rezvani's doctoral dissertation with the guidance of Prof. Mohammad Hossein Sarrafzadeh, the Head of the UNESCO Chair in Water Reuse, is the removal of nitrates from drinking water sources with a nature-based solution.
Various chemical and physical methods to remove this stubborn compound, which conventional water purification processes are unable to remove, have been proposed by different researchers, each of which has its own advantages and disadvantages.
For example, in methods such as RO and IX, after water purification, salt water is produced, which contains nitrates, and its release in the environment creates pollution again. Biological methods are another way to remove nitrates, in which organic carbon sources such as alcohols are used so that microorganisms can remove nitrates by consuming them.
In these methods, the source of carbon and energy is the same, and although it is completely removed due to the consumption of nitrate by microorganisms, there are other problems, such as the residual organic carbon method produces halomethanes as a result of the chlorination process. which is a carcinogenic substance.
‫‬‬‬
In this invention, while biological methods have been used, energy and carbon sources are two different sources, i.e. carbon dioxide as a carbon source and biological hydrogen as an energy source. In the photobioreactor built in this invention, the combination of hydrogen-producing microalgae and hydrogen-consuming denitrifiers and the injection of combustion carbon dioxide causes the rapid removal of nitrate.
The better transfer and exchange of required materials between different microbial species, as well as their rapid separation, is one of the features of the two-stage granulation method with the combination of consecutive and continuous discontinuous photobioreactors with upward flow used in this invention, which is piloted in the water recycling laboratory of the School of Chemical Engineering, College of Engineering.
It should be noted that many inventions have been internationally registered by University of Tehran faculty members, but this is the first time that an invention under the legal name of " University of Tehran" has been registered.
More details about this invention can be accessed through the link https://patents.google.com/patent/US11261112B2/en. 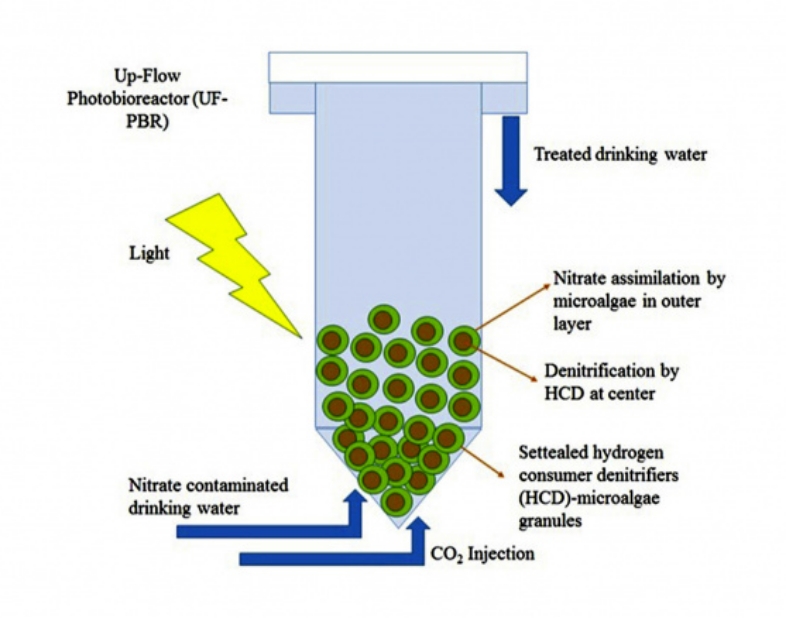