24 August 2022 | 12:30
visits:211
University of Tehran researchers succeeded in designing and implementing a system for detecting and tracking oil springs and oil spills on the surface of the seas using satellite images.

According to the public relations report of University of Tehran, for the first time in the Iran country, researchers from the School of Surveying and Geospatial Engineering of University of Tehran succeeded in designing a system that is capable of identifying oil spills and also tracking oil slicks on the surface of the seas.
Dr. Mahdi Hasanlou, Associate Professor of the School of Surveying and Geospatial Engineering, University of Tehran and the executive of this project, referring to Iran's long water borders in the north and south, called the design and construction of this system important for monitoring within the water borders important and said: "This system in addition to identifying oil spots and springs, it also has the ability to determine the direction of their movement on the water surface. This issue is important in terms of environment and planning and decision making.
He listed the discovery of oil spills one of the other advantages and functions of this system and added: In addition to the existence of oil resources on land, one of the important sources of oil spills in the seas is that this flow of oil flows from oil spills the sea and on the surface of the water. This system is able to discover the location of oil spills and extract the desired information using satellite image processing.
Dr. Hasanlou continued to state the advantages of this system and stated: This system is able to receive and process information of a very large level in a very fast time and determine the new location of springs and spots based on the images that are the reference location.
He mentioned repeatability and generalizability as another advantage of this system and said: If the satellite images were not repeatable, the received information would not have much value; while these received images are repeated every 5 days and this repeatability gives us more accurate and reliable information and sends changes.
The executor of the oil spills and oil spot exploration system project listed the high speed and very low exploration costs as the most important advantages of this system and stated: reducing search and exploration costs, which involve very high costs, is one of the advantages of this system. By using the received data in the fastest time and determining the exact location of springs and spots, exploration costs are greatly reduced.
Pointing out that weather conditions affect the information received in such systems, he said that the advantage of this system compared to similar foreign systems is that it is compatible with Iran's regional climate and weather and said: "The similar foreign system is based on water and our weather, climate and regional geography have not been tested, while this system has been tested and examined according to Iran's regional climate and geographical conditions, and all these things have an effect on the output and information received and processed. We adjusted the parameters required for processing according to the geographical area and the seas of the Iranian region and put them in the optimal mode.
A faculty member of the School of Surveying and Geospatial Engineering of University of Tehran, stating that this system has passed all the field and laboratory tests, added: The articles resulting from this project have also been published in prestigious international journals and have received internal approval and the approvals of the prestigious scientific societies of the world. has received.
He stated that the evaluation and accuracy of the system's operation is above 95% and said: Considering that this system performs the evaluation in a very large area, the goal is to find the exact location of spots and springs, and this goal is achieved with 95% accuracy.
Referring to the specific application of this system in various sectors, including the environment, Dr. Hasanlou added: The amount of discharge and leakage of pollutants and its related effects on the marine environment are important parameters in the evaluation of sea water quality. Effective monitoring, early identification and estimation of the volume of these oil spills is the first and most important step for a successful exploration, cleanup and monitoring operation, and it is considered essential for the relevant authorities to react in time and limit oil pollution and spillage on the sea surface. and prevent further damage.
Stating that this monitoring system is very important for decision-making, he stated: If the relevant managers know that an oil spill is approaching Iran or that something unpleasant has happened, they will be informed and make decisions based on accurate location information from the location. are adopting.
He added: In addition to environmental and economic benefits, this system is also important in regional and political negotiations and provides important information to negotiators and decision makers. For example, it is important in the discussion of common fields and which country discovers a resource first.
Dr. Hasanlou also said about the security of this system: the program is written with all the approaches that are necessary for a system in terms of security, non-access and non-distribution.
In the end, the administrator of the system for the discovery and identification of oil spills and oil spots, stating that this system was carried out in cooperation with the vice president of science and technology, said about the commercialization of this system: This system has reached the commercialization stage and the University of Tehran is ready in addition to domestic markets. to export the product of this scientific achievement to other countries in the region. 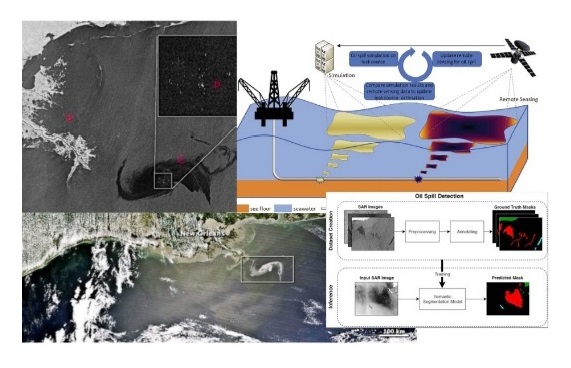