Iranian students barred from US

On 9 September, Milad Aghajohari and much of his extended family piled into cars and drove six hours from Isfahan to Tehran’s international airport. The 22-year-old was on his way to California, set to start a PhD program at Stanford University.

After wishing everyone goodbye, Aghajohari rolled his suitcases into the terminal. He handed his passport to a Turkish Airlines officer and placed his luggage on a scale. A moment later, a senior airline official pulled Aghajohari aside and showed him an email, which said it was “strictly advised” Aghajohari not board the flight. The initials of US Customs and Border Protection were written beneath the message. “In a few seconds,” Aghajohari said, “I went from being a Stanford student to being seen as a potentially dangerous person.”

Aghajohari was one of about 20 students from Iran who were barred from boarding flights to start graduate programs in the United States last month, the majority at campuses in the University of California system. The students were all traveling with valid F-1 student visas issued by the US state department. Most of them were turned away at airports in Iran, while a few were prevented from boarding connecting flights out of Doha and Istanbul. Their cases made headlines around the world.

Since then, the students have been trying to figure out what sparked the last-minute denials, and are reckoning with the financial and psychological toll of being suddenly barred from traveling.

The Trump administration’s travel ban, which bars Iranians and nationals of six other countries from traveling to the US, does not apply to Iranian students, an exception that factored into the US supreme court’s decision to uphold the ban. In the 2017-18 academic year, more than 12,000 Iranians attended US colleges.

Before packing their bags for the US last month, the Iranian students had completed expensive and time-consuming university applications and visa processing. When they were turned away, they rushed to book embassy appointments to find out the reason for the sudden denial. There is no US embassy in Iran, so most of them traveled to Yerevan, Armenia, for appointments, some returning to Tehran by bus – a 24-hour journey – because they could only afford one-way plane tickets.

At the embassy, consular officers told the students their visas were revoked. Several students said the officers seemed puzzled by their cases. Most of the students applied for new visas on the spot, filling out the same forms and answering the same questions they had been asked several months earlier.

Eighteen students found each other online. The first thing they discovered was that, even though most of them were issued visas in June or July, their cases were all updated in the state department’s online tracking system between 27 and 31 August, a few days before the first student’s flight was scheduled. At the time, the students received no email or alert, and the visa statuses on the site remained “issued”. In hindsight, it seemed like more than a coincidence that their cases were updated – all at once – just before the airport denials began in early September.

While the state department says a visa does not guarantee entry to the US, immigration experts said what happened to the students is unusual. “You can’t issue F-1 visas and then just summarily cancel them without providing an explanation,” said Paris Etemadi Scott, an attorney at the Pars Equality Center in California.

F-1 visa belonging to an Iranian student accepted to study in California cancelled at the US embassy in Yerevan.

An F-1 visa belonging to an Iranian student cancelled at the US embassy in Yerevan. Photograph: Courtesy one of the students barred from traveling

What resembles an unwritten extension of the travel ban slammed the doors on students amid escalating tensions between the US and Iran. Lawyers and students wondered if the sudden denials were an act of political retaliation. “I can only speculate that the reason may have more to do with the deteriorating state of US-Iran relations than with anything in the students’ backgrounds,” said Stephen Yale-Loehr, a law professor at Cornell University.

Over the past month, universities and advocacy organizations have demanded explanations from the US government. At a meeting last week, state department officials at the US visa office in Washington DC told representatives of the American Immigration Lawyers Association they were “not aware of the situation at all”, according to the AILA government relations director, Sharvari Dalal-Dheini.

In the absence of an explanation, lawyers said the mass denials are a betrayal of regulations laid out in the travel ban. “They claim they are exempting students and then they revoke the visas,” said Dr Leila Golestaneh Austin, the executive director of the Public Affairs Alliance of Iranian Americans. “It goes against what they promised.”

When Katie Porter, a California Democratic congresswoman, inquired with the US embassy in Yerevan and got an auto-response the students were all familiar with – “We do not have any information to share about your visa status” – they began to laugh in despair. “If they are going to answer to the congresswoman like that,” said Mohammadali, a student admitted to UC Irvine, “we know there will be no help for us.”

A spokesperson for the state department told the Guardian the department does not discuss the details of individual cases. “Visa applicants are continuously screened, both at the time of their application and afterwards,” the spokesperson said.

The last-minute denials have had a deep, possibly lasting effect on a group of Iran’s highest-achieving students. In interviews with eight students, they detailed financial losses, career setbacks, lack of housing, illness, stress and anxiety in the weeks following the abrupt cancellations.

“We invested our lives,” said Nima Abdollahpour, who was set to start a PhD at UC Davis. To gain admission to their programs, the students took costly exams to prove their English fluency and academic abilities, and devoted time and money to applying all over the world. Nearly all of them did so knowing they could only afford to enroll in programs that offered them research or teaching assistant positions that would fully fund their studies.

Most of the students are graduates of Sharif University of Technology, Iran’s most prestigious college, which produces some of the world’s leading mathematicians and scientists. Last year, Aghajohari was the top computer engineering student at SUT; another student, admitted to UC Santa Cruz, ranked third out of more than 200,000 students in Iran’s nationwide university entrance exam.

After gaining admission, Iranian students go through a demanding visa application process. First, they travel to Ankara or Yerevan to interview for their visas. The applications then go through an extensive vetting process that has reduced the number of approvals in the last two years and lengthened processing times.

Should their visa applications be successful, Iranians – unlike other students – are typically granted single-entry visas, meaning they must remain in the US for the duration of their academic program while their family members in Iran are banned from visiting them.

When their visas were issued, the students thought they had finally made it. “I thought that was the end,” said S, a 23-year-old admitted to UC Irvine. She turned down offers she had received from programs in Canada and Europe and began making preparations to move to America.

‘My suitcases and the packing struggle that went on for a month.’ S is an Iranian student whose visa to study in California was cancelled without warning or explanation.

S spent $2,500 on plane tickets, university applications and visa fees. Then she paid rent in Irvine for two months, bought furniture online, registered for several scientific symposiums this fall, and paid Qatar Airways for non-refundable excess baggage. S’s sibling, who lives on the east coast of the US, bought a plane ticket to go surprise her in Irvine.

The financial losses are compounded by the dramatic fall of the Iranian rial over the last six years, largely as a result of US sanctions. Since 2013, the cost of the US dollar against the rial has more than tripled. Students estimated the price of flying from Tehran to Yerevan – about $100 – is equal to a month’s wages.

After graduating from the University of Tehran, Mehran, 24, co-founded an award-winning software company that employs more than 20 people. He had a good life in Tehran, but wanted to pursue a PhD at a top research university in order to improve his company and to give himself the option of starting a teaching career in Iran.

When his visa was approved to start a PhD program at a UC campus, he sold his house in Tehran. He also relinquished 40% of his stock options in his company, transferring them to a new manager the company hired to replace him. “This is something I cannot undo,” he said. As he no longer has a place to stay in Tehran, Mehran has been living with his parents in Mashhad for the past month. “I’m really upset and I’m really weak even in physical health,” he said.

Mehran was not the only student to describe physical and psychological symptoms after being blocked from traveling to start his studies. After she was turned away at the Tehran airport, S stayed in bed for days, crying from stress for hours at a time. Nearly a month later, she is still avoiding people. She doesn’t want to keep explaining what happened or be seen as “‘that person’ who has failed in something”. Last month, she started taking anxiety medication for the first time.

Other students said certain moments have crystallized in their memories. Aghajohari, who was brimming with optimism as he departed for Stanford, recalled the world turning on him the second he was denied at the check-in counter. “Every passenger was looking at me like I was a criminal,” he said. “It is really hard for me to forget that moment.”

While the students continue to wait for answers, fall quarter classes have started without them. Mehran, Abdollahpour, Aghajohari, and S are all staying with their parents in different parts of Iran. Aghajohari spends his days taking his grandmother to chemotherapy appointments and reading novels to get his mind off the visa problems, whenever possible. “Most of the time at home is spent talking about this issue,” he said. “My parents are very worried about it.”

The students hope to be in California when the winter quarter begins in January, but are finding it hard to trust the process. Several are looking into programs in other countries. “We had a lot of dreams about our future,” Abdollahpour said. “Now I think they might not happen.”

Courtesy of The Guardian 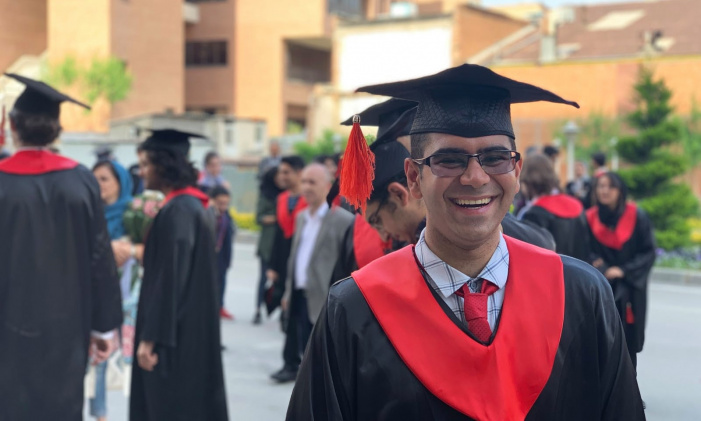