The project will be carried out under a Memorandum of Understanding which was inked on Saturday between the Italian university and provincial cultural heritage department, CHTN reported.

Sapienza University of Rome has long been active in studies related to the Iranian history and civilization, said Omid Qaderi, the provincial tourism chief.

“It can bring its valuable experiences to Kermanshah,” the official said.

Temple of Anahita in Kangavar, the Palace of Ardashir in Firuzabad, and the Anubanini petroglyph are among historical sites that are to be documented, he added.

The province embraces awe-inspiring historical sites including Bisotun and Taq-e Bostan, both on the UNESCO World Heritage list.

Inscribed into the base of a towering cliff, Taq-e Bostan comprises extraordinary Sassanian bas-reliefs of ancient victorious kings divide opinions.

UNESCO has it that Bisotun bears an outstanding testimony to the important interchange of human values on the development of monumental art and writing, reflecting ancient traditions in monumental bas-reliefs. Measuring about 15 meters high and 25 meters wide, the inscription was created on the order of King Darius I in 521 BC. It bears three different cuneiform script languages: Old Persian, Elamite, and Babylonian. 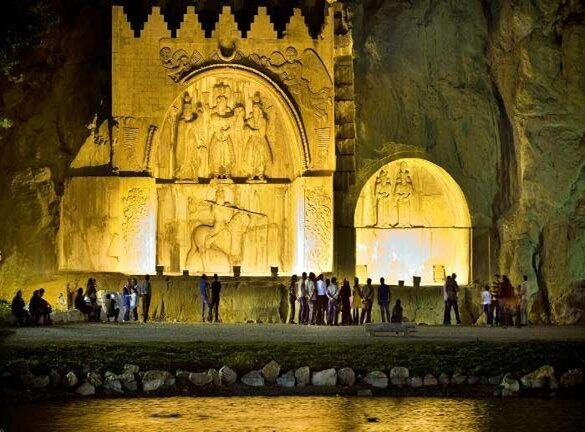