André Godard and the Iranian Archaeological Service (1928-1960) is the topic of a talk by Sarah Piram. This talk will be presented on Wednesday 11th September at 18.30 at the venue of Asia House, 63 New Cavendish Street, London W1G 7LP Organized by The Iran Heritage Foundation.

André Godard (1881-1965) was a French architect who was Director of the Iranian Archaeological Service from 1928 to 1960 and Director of the National Museum, which he designed, from 1936 onwards. These appointments by the Iranian government encouraged significant cultural diplomacy between France and Iran.

Godard was involved in drawing up the antiquities law of 1930, and during his long career he studied and restored many major historical monuments across Iran. This lecture will look at the works and measures of the Archaeological Service, created at the time of Reza Shah, and will review the wide-ranging activities of Godard. Amongst many achievements, he rebuilt the Tomb of Hafez in Shiraz. He was also in charge of drawing up plans for the University of Tehran, especially the Faculty of Fine Arts. In spite of all these works, his career has often been shrouded in controversy. This lecture seeks to redress the balance and rehabilitate a remarkable figure who did much to protect and promote the cultural heritage of Iran.

Sarah Piram is the Iran Heritage Foundation Curator for the Iranian collections at the Victoria & Albert Museum, London. She studied History of Art and Archaeology at the University of Paris 1 Panthéon-Sorbonne, and is now completing her PhD at Paris Nanterre University and the Louvre Museum, where she worked from 2015 to 2018. Her research is based on the history of Iranian collections and heritage, as well as architectural developments in 20th-century Iran. In 2017 she published an article on the history of Iranian museums in Les Cahiers de l'École du Louvre, "S'approprier un modèle français en Iran? L'architecte André Godard et la conception des musées iraniens". 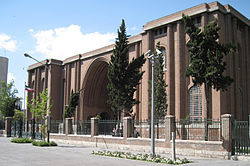