TEHRAN, Aug. 19 (MNA) – The 32nd International Film Festival for Children and Youth, to kick off today in Isfahan, has announced the jury members for the National Section of the festival.

He is a television director and screenwriter who started his job via making short films. He has completed his education in cinematography at the High School of Television and his first film was "Willow Branches". His famous TV series is called "Rozi Roozegari".

He is a cinema and animation producer. He holds a degree in economics and is the chairman of "Artwork Group". Jafari began his professional career as a producer of cinematic animations "6:50 in Bushehr" and is currently an official producer of the Iranian Cinema Producers' Association. He has produced the best-selling animations in the history of Iranian cinema, "The Prince of Rome" and "The Filshah", which won an honorary diploma from the 18th Iranian Cinema Feast.

He is a director and screenwriter for children and the youth cinema. He has directed films such as "Impact", "Camp Escape", "Ashimashi Sparrow", etc. He has authored numerous works in the field of children in cinema and television.

Graduated from acting school, she is an Iranian actress, who has won the Silver Bear for Best Actress in 61st Berlin Film Festival, shared with other actresses of "A Separation". Bayat has also starred  in "21 Days Later" directed by Mohammadreza Kheradmandan.

She is a writer and director of cinema and television. She has master's degree in drama literature from the Faculty of Cinema and Theater at the University of the Arts. Her most notable works are "The Glory of One Life", "The Other" and directing of "The Abi". She has also worked extensively in the field of short films.

Presided by Alireza Tabesh, the 32nd International Film Festival for Children and Youth is slated to be held in Province of Isfahan on August 19-26, 2019 in the feature, short story, web series, long animation, short animation sections. 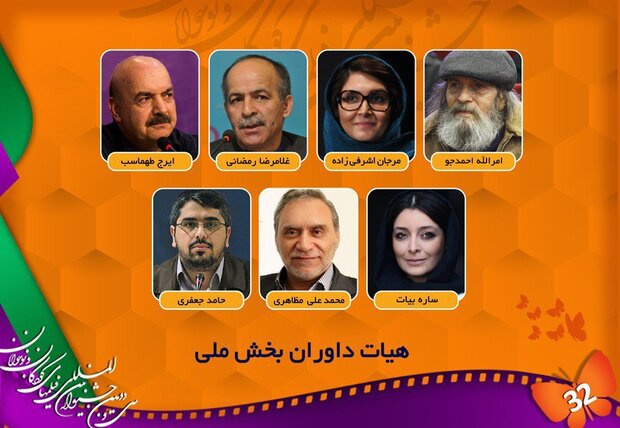