The International Symposium on “Art and the Fourth Dimension” was held on Tuesday , the 18th and Wednesday 19th January 2019, at Shahid Avini Hall, College of Fine Arts, University of Tehran. This symposium was the first international and interdisciplinary event in which all the schools of the College of Fine Arts participated. It was also the first event in which the lectures and abstracts of articles were presented in three languages: Farsi, English, and French.

This symposium was organised by the Office of Advistor to the Dean on International Affairs at the College of Fine Arts, and was made possible with the sponsorships of the International Organisation of the Francophonie and the Cultural Section of the French Embassy in Iran.

The event represented the collaboration between College of Fine Arts and the Ministry of Science, Research and Technology, the Islamic World Science Citation Center, the University of Paris 1 (Sorbonne-Pantheon), the University of Waterloo, the University of François Rabelais Tours, the National School of Architecture Paris-Malaquais, and Namahn and Concepto design companies.

The International Symposium on Art and the fourth dimension discussed issues of time, space and movement in art. This two-day event was held in four different panels with topics related to the title of the symposium. Each panel examined different conceptions of the fourth dimension in terms of various arts disciplines, such as architecture and urban design, industrial design, visual arts, performing arts and music. Also, along with the lectures, an exhibition of artworks by writers and artists who responded to the call was held.

Contributions to the symposium was not limited to the submission of a paper or posters, rather interested parties sent their works in the form of audio and video files, dynamic models or any other media that was related to the topic of the symposium.

The first day of the symposium began by some words from the Holy Quran, the national anthems of France and Iran, the anthem of the University of Tehran, and the welcome speech of Dr. S. Yahya Islami, the chair of the symposium and the International Affairs Adviser to the College of Fine Arts. Then, the Cultural Attache of the French Embassy in Iran delivered a speech about the cultural role of the French embassy in promoting the development of scientific and cultural activities between Iranian and French universities, and appreciated the efforts of the organizers and made good wishes for the participants in the two days ahead. Subsequently, a short film entitled “Imagining the Fourth Dimension“ (by Rob Bryanton) was displayed, thus beginning the first panel with lectures by Jac Fol, Seyed Gholamreza Islami and Denis Martouzet. In this panel, issues about the photography of time in architecture and urban design, network and topological theories, definitions of past, present and future, conceptual modelling of other dimensions of art, and readings of unwritten texts by artists were discussed. After the lectures, time was made for questions, answers and discourse with the audience. The second panel began with speeches by Joannes Vandermeulen, Ahmed Alasti and Azin Movahed, and valuable discussions about interactive design, time and delay, types of time in cinema, the relationship of time and timing with the soul and body of musicians were carried out.

The second day of the symposium began with the speeches of Roger Narboni, S. Yahya Islami, Mohammad Bagher Ghahramani and Hasan Bolkhari Ghahi. In this panel, there was talk of lighting, shading and coloration in architecture and urban design. Also, concepts such as more-dimensional and inter-dimensional thought, space-time relativity, new definitions of past-present-future, reality, representation, image, technology, creativity, and imagination were also discussed. In addition to the above, discourse on kinematic time, hierarchical and rhizomatic thought, the combination of time and place, the definition of time in the views of Muslim thinkers and the geometry of volunteering were also examined. In the fourth and final part of the symposium, Fater Saadat Niaki and Ramtin Lotfabadi presented their lectures on the relationship between design and emotions and the role of the fourth dimension in designing user interfaces, virtual reality and augmented reality. After question time, an animation by Amir Kazemi focused on art and the fourth dimension in the final stages of the event. During the two days of the symposium, the lectures presented at each panel were analysed and summarised by Dr. S. Yahya Eslami in English, which marked the beginning of the discussions for each panel.

The Art and the Fourth Dimension symposium was chaired by Dr S. Yahya Islami, with Dr. Maryam Khalili as the Scientific Secretary and Dr. Somayeh Fadaei Nezhad as the Executive Secretary of the Symposium. At the closing ceremony, all the speakers, exhibitors, authors, colleagues, sponsors and all those involved in the College of Fine Arts and the University of Tehran were thanked for their contribution, ending with suggestions about the possibility of the next AFDIS symposium in due course. 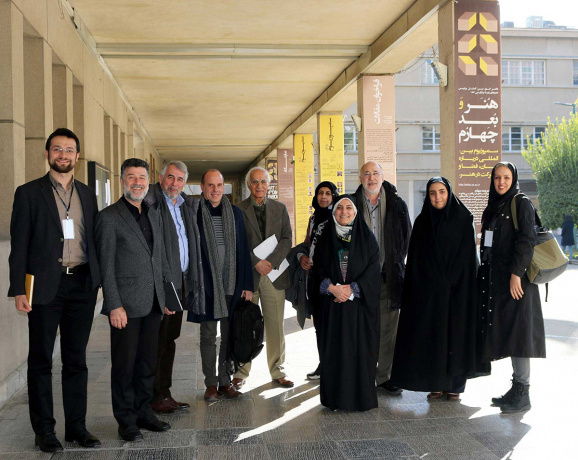 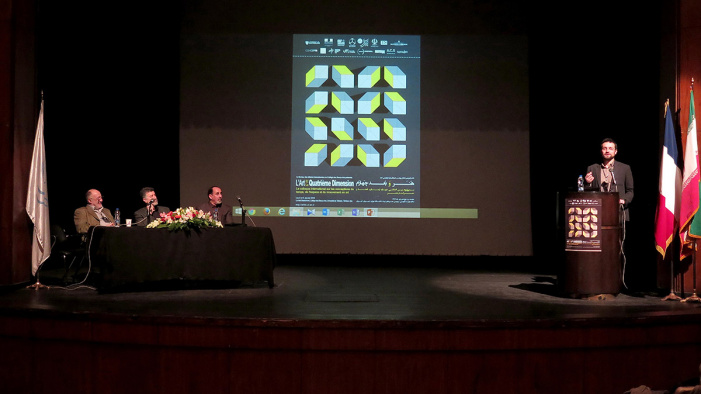