The first Cultural Week of Columbia was held in Iran on Monday 30th of April in the presence Ambassador of Columbia with participation of professors, students, and officials of World Studies Faculty and other organizations in Hannaneh Auditorium in the Faculty of World Studies.

At the beginning of the ceremony, Dr Saeid Reza Ameli, the Dean of Faculty of World Studies, welcomed the Columbian Ambassador and all of the Iranian and Foreign guests taking part in the ceremony. He then thanked Dr Maryan Haghrusta, the Head of Latin American Studies Department  at the Faculty of  World Studies  who had provided the grounds for holding this ceremony. He further considered the role of students in the organization of this program as very significant.

He also added that: “As the main principle is understanding and respecting others together with exchange of ideas in universities, culture, politics, and scientific and academic public diplomacy, I hope that these three days of companionship with beauties, culture, and civilization of Columbia bring us a profound understanding about this country”.

The next speaker of the inauguration ceremony of the cultural week of Columbia was Juan Alfredo Pinto Sa’abdera, the Ambassador of republic of Columbia, who started his speech with his scientific background and stated: “Unlike the general perception implying that Columbia is full of warriors and drug smugglers, many people in this country have academic degrees and are studying and working as officials like other normal people”.

The Columbian ambassador continued his talk on civilization, culture, and art of Columbia and made a note of the beautiful, unique, and wonderful nature of Columbia, emphasizing the undeniable effect of Amazon and its unmatched nature on Columbian culture and literature. In this regard, he mentioned the outstanding works of prominent figures including Gabriel Garcia Marquez, Butero, and D Silva. 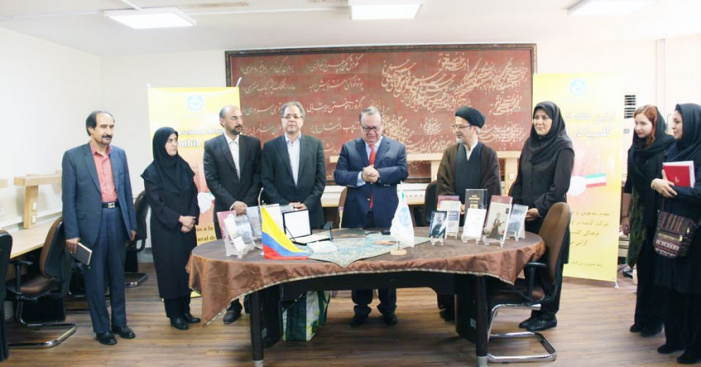