visits:2098
SURENA III can interact with humans through its vision, voice recognition and speech modules

SURENA-III has a height of 190 cm and a weight of 98 kg. In 2012, Center of Advanced Systems and Technologies (CAST), College of Eng., University of Tehran, has launched the project SURENA III, the third generation of the Iranian national humanoid robot, under Prof. Aghil Yousefi-Koma (a faculty member of the School of Mechanical Engineering, College of Engineering, University of Tehran) supervision with the financial support of the Industrial Development and Renovation Organization of Iran (IDRO). During almost 4 years of research and development, 70 people have involved in the project, while 14 percent were faculty members from 6 different universities. 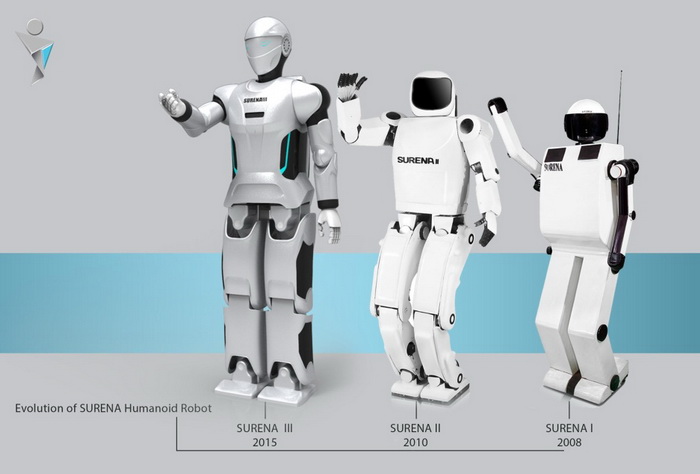 SURENA III’s height is 190 cm and its weight is 98 Kg. The robot has 31 degree of freedom (DOFs), 6 DOFs in each leg, 7 DOFs in each arm, 1 DOF in each hand (a simple gripper), one DOF in the torso, and 2 DOFs in the neck. The lower-body joints are actuated by EC motors, a combined timing belt-pulley and harmonic drive module is exploited for power transmission. The upper-body joints are driven by servomotor packages which include motors, gearboxes and drivers

SURENA III can interact with humans through its vision, voice recognition and speech modules. The customized software that has been developed in Robotic Operating System (ROS) enables the robot to simultaneously communicate with the environment, manage its behaviors, monitor its sensors, and detect unwanted faults in the system. The robot is capable of performing various tasks, i.e. walking on straight and curved paths, walking up and down the stairs and sloped terrains, online adaptation on the surfaces with height uncertainties, and gripping objects. Besides, the robot is able to perform exhibitive actions, detect objects and faces, imitate human motion, and recognize voices (in Persian).