A congratulatory message to new Coordinator General of COMSTECH

I am very happy to learn that you have taken on the Coordinator General of COMSTECH and I congratulate you on this great responsibility. Hope that with this opportunity, we will work together to advance science and technology in the region and the ECO countries.

After this, SASTIW was held four international summits themed Health and Lifestyle. The first summit entitled "Culture and Cyberspace" was held in January 2016. The two other summits entitled "Water, Sustainable Development and Healthy Life" and "Global Soil Threats" were held in March and May 2016, the fourth one on the issue of population dynamics and human capital in 2018 respectively.

I hope that during this period we will be able to establish a link between COMSTECH and SASTIW and provide joint cooperation for the advancement of science and the solution of scientific and technological problems in the region and the Islamic world.

I wish your health and success.

Secretariat for the Advancement of Science and

The new Coordinator General was appointed by The President of Pakistan for a period of four years.

Prof. Dr. M. Iqbal Choudhary is a Distinguish National Meritorious and Director at International Center for Chemical and Biological Sciences (H. E. J. Research Institute of Chemistry and Dr. Panjwani Center for Molecular Medicine and Drug Research). He is among the most prominent scientists of Pakistan, recognized for his original contributions in the fields of natural products and bioorganic chemistry. He has written and edited 76 books, most of which have been published in USA and Europe. He is also the author of over 1,175 research papers and chapters in top international science journals of the West, as well as 40 US patents. This is by far the largest number of quality publications from any scientist in Pakistan. He has been among the most cited scientists of Pakistan in last five years with citations exceeding 27,407 (h-Index: 68). He is the Volume Editor of many international book series and journals. He has served as a visiting faculty in many prestigious universities of the world, including Cornell University (New York), Purdue University (Indiana), Pennsylvania State University (Pennsylvania), Scripps Institution of Oceanography (San Diego, California), The University Rhode Island (Rhode Island) and various top Universities of UK, China, Saudi Arabia, Malaysia, Kazakhstan, and Iran.

Prof. Choudhary has won several national and international awards, such as Hilal-e-Imtiaz, Sitara-e-Imtiaz and Tamgha-e-Imtiaz by the President of Pakistan, Pakistan. Academy of Sciences Gold Medal, National Book Foundation Prize on best book and the Third World Academy of Sciences Young Scientist Prize. He received the prestigious title of “Distinguished National Professor” from the Higher Education Commission in 2004 and Meritorious Professor by the University of Karachi 2013. He is a member and fellow of many prestigious societies including Fellow of The Academy of Sciences for the Developing World, Islamic Academy of Sciences, Chemical Society of Pakistan, Royal Society of Chemistry (London) and LEAD-International. He is also the recipient of the 1st Khawarizmi International Award and Prize from the President of Islamic Republic of Iran, Economic Cooperation Organization (ECO) Award in Education by the President of Azerbaijan, and COMSTECH Award in Chemistry by the Prime Minister of Pakistan.

The Inter-Islamic Network on Science and Technology Parks (INSTP) secretariat, on behalf of all INSTP members, express our heartfelt congratulations for His Excellency’s his new position as the Coordinator General of COMSTECH and wish him success in carrying out the main goal of COMSTECH to build and nourish a scientific culture and use S&T as a major contributor to socio-economic development. 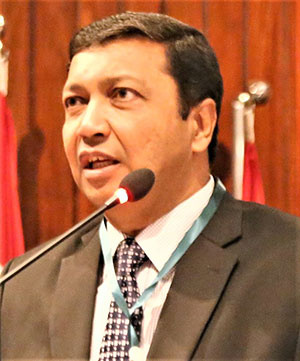