Robert H. Dyson, discoverer of Gold Bowl of Hasanlu in Iran, dies at 93

TEHRAN – Celebrated anthropologist and archaeologist Robert H. Dyson, Jr., who shined at Iran’s archaeology scene in mid-20th century, passed away on Sunday. He was 93, ISNA reported.

Dyson is best remembered in Iran as the discoverer of the “Gold Bowl” of Hasanlu, ca. 900 BC, which is now being kept at the National Museum of Iran.

Dyson directed the Hasanlu Project from 1956 to 1977. He received his PhD from Harvard University in 1966. Before working in northwestern Iran, he participated in research projects in Africa and at Jericho, Nippur, Susa and Bahrain Island, as well as in the United States.

The senior archaeologist served as Dean of the Faculty of Arts and Sciences at the University of Pennsylvania from 1979 to 1982.

From 1982 to 1994, he was the Director of the University of Pennsylvania Museum. He was president of the Archaeological Institute of America and he is a member of the American Philosophical Society. Dr. Dyson has written numerous articles on ancient Iran, especially the sites of Hasanlu Tepe and Tepe Hissar.

Among the most important objects uncovered at Hasanlu were an unusually decorated silver bowl, several iron garment pins headed by bronze lions, a solid gold bowl, a knife handle with gold cloisonné, and two hollow bronze horse heads that served to hold liquids.

According to the Britannica Encyclopedia, Hasanlu was inhabited from about 2100 to about 825 BC, but the richest period yet excavated dates to the 10th and 9th centuries BC. The period, often called “Mannaean” after the name of the people who lived in the area, is characterized by a gray pottery accompanied by black and red varieties, the black ware being of much finer quality and probably made in imitation of metal vessels.

Experts say parallels to the motifs on the Hasanlu objects have been found in Elam, Assyria, north Syria, and Urartu, indicating that Iran not only received considerable cultural and artistic stimuli from other areas but also in turn exerted influence on the Middle East. 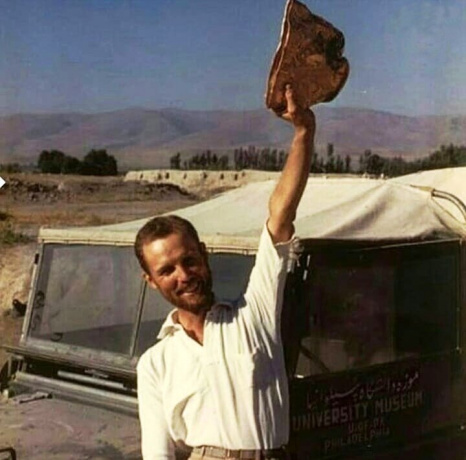