TEHRAN – A book presenting a wonderful collection by Qajar-era calligrapher Mirza Gholamreza Esfahani was unveiled during a ceremony at the House of Humanities Thinkers in Tehran on Monday.

Collected by scholar Mozaffar Bakhtiar (1943-2015), the book entitled “Collection of Works by Calligrapher Mirza Gholamreza Esfahani” has been released by the Ketabsaraye Nik publishing company.

Mirza Gholamreza Isfahani (1868-1926) was born in Tehran and buried in the Safaieh district of the city of Rey near Tehran.

The book also containing articles about Mirza Gholamreza Esfahani has been completed after 40 years of continuous research by Bakhtiar.

The works have been selected from 30 private collections, as well as from museums and the library of the University of Tehran.

In his brief words at the ceremony, Dehabshi expressed regrets that Bakhtiar was not alive to see the results of his lifetime endeavors in collecting the precious documents.

Aghdashlu also said that he had been waiting for the book for more than 40 years, and added, “This book is very valuable for the artists and calligraphers, because Mirza Gholamreza was an influential artist in the history of Iranian art and Bakhtiar was a respected art scholar.”

“The book contains rare copies of manuscripts, a part of which I collected between the ages of 18 to 25, and I had a good feeling by seeing them again,” Aghdashlu added.

He also said that he liked the style of writing in the book as well as its divisions.

Bakhtiari's son Zarvan also said that the book shows the deep love of his father to Mirza Gholamreza, and noted, “My father used to carry two copies of Mirza Gholamreza’s calligraphy works with him in his long trips to China and South Korea and would enjoy looking at them for hours.” 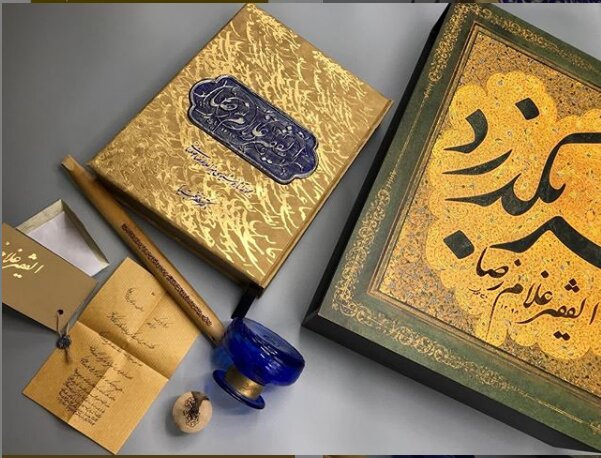