After the first preparatory works including compiling a data-base with more than 45.000 entries on the collection of archaeological objects, and collecting regarding publications like relevant archaeological and archaeometric articles and monographies in a further step Dr. David M.P. Meier, a German Post-Doctoral researcher at the Institute of Archaeology at University of Tehran have been granted access to different scientific cultural libraries and archives.

There he was able to study previous unpublished reports, so called “grey literature” relating to his archaeological field of research on East Iranian Bronze Age. In addition he also visited several regional museums and storages affiliated with the Ministry of Iranian Cultural Heritage, Handicraft and Tourism.

There he conducted further research on pre-Islamic objects according principles of archaeological documentation. “For the introduction to the different organizations, museum collections and libraries the administrational staff and lecturers of the Institute of Archaeology and the Department of Literature and Humanities were of invaluable help. Without their support the progress of the project would never succeeded in that way.

“I am very grateful for this way of loyal and cooperative support of my dear colleagues at the University of Tehran“, he says. The goal of this Post-Doctoral project is the reconsidering of an important archaeological site which was discovered more than 50 years ago but unfortunately never have been properly published.

He is working on an estimated collection of more than 6000 pre-Islamic objects which are distributed over different museum collections inside of the Islamic Republic of Iran. His research consists of an assessment according to typological studies and comparison with discovered objects. In a further step chemical and petrographical analysis are conducted to identify for example the objects´ chemical as well as further relating questions. His next task will be the evaluation of the objects´ collection which is housed in the National Museum of Iran in Tehran. 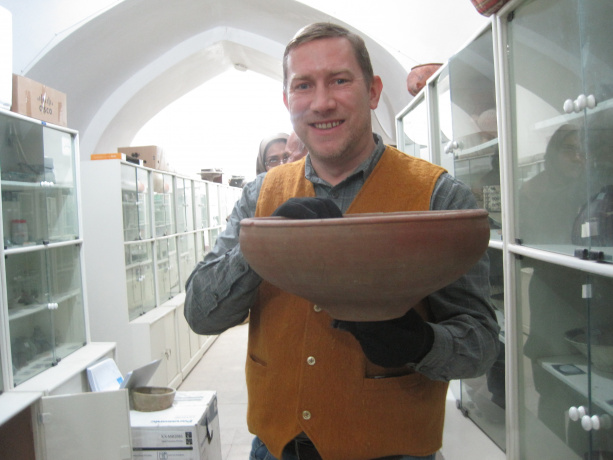