The Iranian artist who worked with Warhol

Monir Farmanfarmaian looked up at the mosaic of mirrors that covered the mausoleum‘s walls and ceiling. It was the moment that reshaped her artistic career.

“The very space seemed on fire, the lamps blazing in hundreds of thousands of reflections,” she would later write in her memoir. “I imagined myself standing inside a many-faceted diamond and looking out at the sun.

“It was a universe unto itself, architecture transformed into performance, all movement and fluid light, all solids fractured and dissolved in brilliance in space, in prayer. I was overwhelmed.”

The year was 1975, and the setting was the Shah Cheragh (King of Light) shrine in the Iranian city of Shiraz, that had been decorated in splintered mirrors since the 14th Century.

At the time she visited the shrine, Monir was already a recognised artist in the US and her native Iran, but the epiphany in Shiraz left her “fired up with ideas”, she wrote in her memoir, A Mirror Garden.

When she was seven, the family moved to Tehran, where her father had been elected to parliament, and young Monir got her first glimpse of the capital modernising ….

Her first taste of art came in a once-a-week class in school, in which she was made to draw flowers or – on one confusing occasion – a jug sitting on a chair placed on a table.

“The teacher called this ‘still life‘,” she wrote in A Mirror Garden. “It perplexed me at first, but still it was more fun than math.”

At the Fine Arts College of University of Tehran, she met the man who would become her first husband, Manoucher. During World War Two, the couple moved to New York but it was a loveless marriage, with Monir making progress in her artistic studies and Manoucher holding a single-minded determination to become a famed artist.

“My role,” she wrote, “was to help that destiny along by providing financial support, unending praise, and gracious entertainment for any gallery owners and wielders of influence who crossed our path.”

It was Monir herself who began to associate with artists of influence, spending time at the Tenth Street Club in Greenwich Village with Jackson Pollock, Mark Rothko and Willem de Kooning, among others.

Another soon-to-be-famous name crossed Monir‘s path when she started her first main job as a fashion illustrator with department store Bonwit Teller. His name was Andy Warhol, who was then working as a shoe illustrator.

“Conversation was not his strong suit,” she said, “but we made a connection in spite of his ghostly shyness.”

Love – or at least the prospect of it – took Monir back to Iran in 1957, in the guise of Abol Farmanfarmaian, a man of aristocratic background who had babysat for her first daughter in New York.

With Monir‘s divorce to her first husband finalised, she was wary, but welcomed the return to an evolving Iran 12 years after leaving. Just as the colours of Iran had never left her paintings of flowers, as her teachers noted, all her happy memories of her homeland had remained in place.

It was during this period back home, and during her long and happy marriage to Abol, that Monir flourished as an artist, beginning with her winning a gold medal for her display at the Iran Pavilion in the 1958 Venice Biennale.

Monir had seen mirror mosaics before that day in the mausoleum in Shiraz – the style had been used elsewhere in Iran – but none had affected her in quite the same way. There was a practical reason for the style: centuries ago, mirrors that were imported from Europe had often broken by the time they had arrived, and so they were reused.

The style encouraged Monir to experiment: with shapes, with geometry, with building images up from their smallest fragments. Hexagons, the shape she later called “the softest form” that opened up more and more possibilities to link shapes, began to feature prominently in her work.

“I read up on Sufi cosmology and the arcane symbolism of shapes,” Monir wrote in A Mirror Garden, “how the universe is expressed through points and lines and angles, how form is born of numbers and the elements lock in the hexagon.”

P.S. Negarestan Garden Museum in Tehran, affiliated to University of Tehran, has dedicated a permanent hall for a gallery to artist Monir Farmanfarmaian. 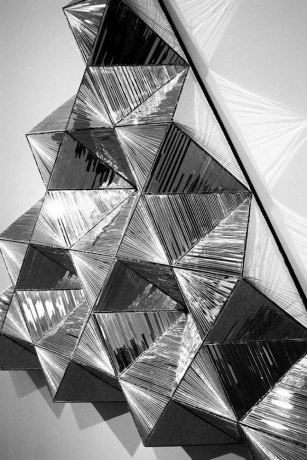 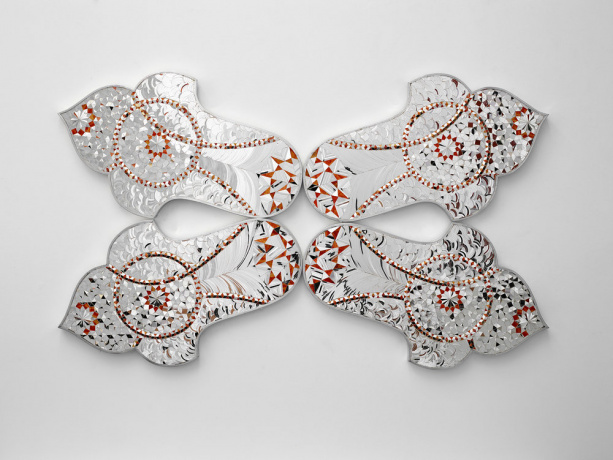